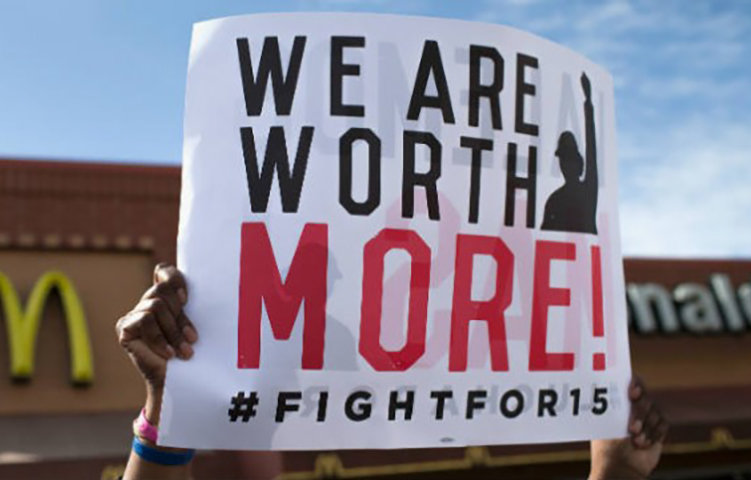 If we get our way, one day Senators Richard Burr and Thom Tillis will fight their way out of their Washington office suites, tunneling through mountains of waste and scuzz, and visit the inviting and picturesque Outer Banks. Here, they will enjoy a plate of undercooked, unshelled, sand-vein-still-in shrimp before sharing their unmade dirty-sheet hotel bed with a collection of the finest insects the Eastern United States has to offer.

Why do they deserve such a fate? It’s this simple: Those who don’t think workers in the various Outer Banks service industries deserve a living wage do not themselves deserve to work in a sanitary office, get prompt and courteous service at a local restaurant, or stay in a clean hotel room. Here or anywhere.

The Democratic Party’s Better Deal runs with the concept of a $15 per hour minimum wage. If one works 40 hours a week for 52 weeks, that’s $31,200, which isn’t a lot of money. It’s a paycheck-to-paycheck level of compensation that is very difficult to live on in this day and age. Yet it’s far more than most Republicans are willing to go.

Thus far in the U.S. Congress, Republicans have been unwilling to budge from the current minimum wage of $7.25 an hour, or $15,080 per year—a sum nobody could live on. At that wage, a person would have to work 96 hours per week to afford a two-bedroom apartment in North Carolina. Allowing 49 hours per week for sleeping, that would leave 23 hours for living and playing.

Where do Burr and Tillis stand? According to Michael de los Santos of the Raleigh News & Observer, Burr has been a consistent opponent of attempts to increase the minimum wage. And according to John Frank of the Charlotte Observer, Tillis called an Obama proposal to raise it “dangerous.”

We’ve heard it suggested by Republicans that individuals are responsible for getting the knowledge and skills they need to move up the economic ladder. But the Republicans don’t explain how people are supposed to do that when they’re working endless hours at low-paying jobs while the cost of higher education continues to skyrocket.

But let’s follow this to its logical conclusion. Let’s say everybody gets an education and somehow lands a better job despite their current local scarcity. Nobody would be left to do the service jobs! It would be a classic case of too many chiefs, with a full brigade of owners and managers running around trying to give orders to a workforce that doesn’t exist.

But this conservative pipe dream where everybody works hard and achieves a decent-paying job is impossible. Even if 100% of the U.S. workforce earned at least a bachelor’s degree, the jobs we’re talking about would still need to get done, and some college-educated Americans would have to wait tables, make beds, and so on.

The people who do this hard but vital work and keep the local economy humming along deserve a living wage for their effort. And that includes access to affordable and reasonably close housing, as well as adequate health care. It is only fair. It is only humane.

Employees should not be treated as a commodity—a cost of doing business that needs to be kept as low as possible in the interests of fattening profit margins and pleasing shareholders.

The grotesque failure of the capitalist system in its current state is tantamount to telling every member of the working class that his or her value is on a par with brooms and silverware and soap. The system’s failure is condemning tens of millions of workers to an existence at or below the poverty line.

In the end, since North Carolina’s two senators exhibit no appreciation for the dignity of labor, they do not deserve to benefit from its fruits. Burr and Tillis and those who agree with them should live their lives surrounded by rotting garbage, eating food that is potentially life-threatening, and retiring to a bed laden with vermin and filth of every description.

Then again, perhaps Mr. Tillis would thrive in such an environment. He famously suggested that rules requiring restaurant workers to wash their hands after using the restroom was an example of government overreach.